What is production design and why is it important for a made from scratch showreel scene?

Production design is the creation of the physical world of a film. It helps the cinematographer to create the style and look of a film trough costume, make-up, sets, props and location choices enabling the audience to dive into that world. It`s also what makes the budget of some movies really high when they build up houses, or entire streets, or villages, and they individually create all costumes, sets and props.

Now when it comes to a made from scratch showreel scenes, then none of these can be afforded and I doubt that an actual production designer would ever be involved. But it is important to think of it as it is a crucial part of a professional, cinematic look and without it, no one will ever believe that that scene is from an actual production.

The good news is that you don`t have to go super crazy about it and it doesn`t HAVE TO cost you a lot of money. Little things can make a big difference.

Watch this video to find out how you can improve production design. 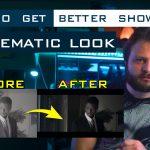 Cinematic LookHow To Get Better Showreels

LocationHow To Get Better Showreels